Across Faith and Identities, NYC is Leading the Fight against Islamophobia 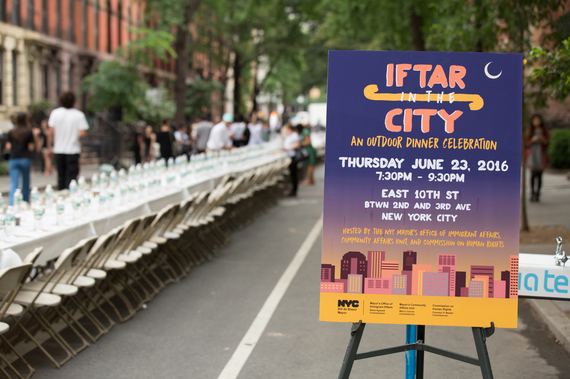 Across Faith and Identities, NYC is Leading the Fight against Islamophobia

In the wake of the tragedy in Orlando, Americans mourned together at nationwide vigils and stood in solidarity with the LGBT community. These moments of unity give hope to a country that all too often fragments along political lines.

Unfortunately, the compassion we have seen from many has been accompanied by attempts by others to exploit this tragedy. Some have reacted out of fear by promoting policies that would exclude Muslims and immigrants from being welcomed, or from the United States entirely. These reactions are wrong. They place the blame at the feet of an entire religion or an entire people, and they contribute to a harmful culture of Islamophobia.

In New York City, we want to change that conversation. That’s why Mayor De Blasio ‎ tasked the Community Affairs Unit with ensuring the integration of Muslim New Yorkers fully into outreach and working with agencies to promote culturally responsive services. That’s also why this week, in collaboration with the Mayor’s Community Affairs Unit, we held the first ever Iftar in the City, a new event that reflected New York City’s rejection of exclusionary rhetoric and violent acts of hate. The iftar was a festive dinner celebration, including many New Yorkers from different religious, cultural, and ethnic communities, to break the daily fast of Ramadan—the holy month when fasting inspires compassion for those in need. We hope that this shared experience was a timely occasion for self-reflection for all of us as we are challenged to combat hateful language and violence. By honoring Muslim traditions together, this iftar exemplified New York City’s innovative approach to inclusion and understanding among all our residents, from all religious, cultural, and immigrant backgrounds. All of us have dedicated our careers to these goals. As Commissioner of the Mayor’s Office of Immigrant Affairs, Nisha Agarwal has spearheaded a range of programs to increase immigrant inclusion, such as IDNYC, a government-issued identification card that has reached hundreds of thousands of New Yorkers and helped connect them to libraries, museums, hospitals, and much more. Commissioner Carmelyn P. Malalis heads the NYC Commission on Human Rights which fights all forms of discrimination across New York City and fosters respect and understanding among all New Yorkers, regardless of their faiths, cultural backgrounds, or other aspects that inform their identity. Sussie Lozada, a prominent community and union organizer, is a leading voice for Latina Muslims in New York City and fights alongside her union members to break down barriers to inclusion. Iftar in the City was the largest outdoor, interfaith iftar hosted by city government in New York City history. The Mayor’s Community Affairs Unit has been a key partner in this event, ensuring that New York City communities are represented and included in the iftar and other events that bring New York City together year-round. This event reflects Mayor Bill de Blasio’s commitment to ensuring that the city is a welcoming place for all New Yorkers. In the spirit of inclusion, the evening featured speakers from a variety of faiths and backgrounds. These leaders also guided prayers for the victims in Orlando.

It is our hope that this iftar will spread New Yorkers’ welcoming spirit, in opposition to the voices of Islamophobia, xenophobia, and division, that we have heard in recent days. This iftar comes just several days after World Refugee Day, and it serves as a reminder of how misguided fears of immigrants can threaten not only those who live here and work alongside us, but also the thousands fleeing violence and oppression in their home countries. As we unite communities in New York City, we must remember our duty to embrace all new members of our communities, a defining characteristic of New Yorkers and Americans. June is also LGBTQ Pride month. The first Pride parade was an act of protest by people who had been told too long that they do not belong. We would not do justice to the LGBTQ Latinx community members lost in Orlando if we did not recognize how closely connected our freedoms are. Through this iftar we will strengthen our resolve to make sure that no individuals in our city feel unwelcome because of their religion, their immigration status, the gender pronouns they use, or whom they love.

This article was published June 26th, 2016 by Nisha Agarwal.